Corrosion Control and its Impact on Electronics

We all know that ESD (Electro-Static Discharge) ruins, or can seriously damage electronic circuits, cards, components and/or assemblies. However, we do not always give enough credit to the impact that corrosion has on creating failures or walking wounded electronics.

The big problem is that unless corrosion is actively protected against, there will be a reduction in the reliability of the electronics stored inside the packaging.

Corrosion (Rust) and its Impact on Electronics

When we think of corrosion or rust, we think of iron, or items left outside to the weather and elements. We don't consider corrosion corrosion in terms of micro-corrosion. This includes corrosion on small materials, such as a PCB, PWB or components of electronics. Yet, corrosion can and does happen on bond pads (wafers) as well as any metal surface. The exceptions being surfaces which are gold or covered up with some type of protective coating. When corrosion happens, often the best-case scenario is that resistance of the metal increases. This produces more heat and can result in an EOS (Electronic Over-Stress) failure. Also, we can have a junction connection failure because of corrosion. We don't always consider worst-case scenarios, such as EOS events resulting from increased resistance due to corrosion.

How does this Happen?

EOS applies to electrical/thermal damage. Sometimes, electrical currents are conducted through a component whose specifications are inadequate to handle the high current. When this occurs, it produces excessive thermal energy (heat) and the component’s temperature increases. This high heat shortens the operational life of the component.

Picture the average person running on a treadmill. They’ve done their stretching, are wearing the proper footwear and have the treadmill set at a manageable and steady pace. As they jog, they’re having no problem in keeping up with the speed of the treadmill.

Now imagine that the treadmill’s speed increases 10x faster without any prior warning. Our unsuspecting runner is now pushed past his limit. He tries his hardest to keep up, but his legs are becomming overworked and his thermal energy is off the charts. He tries to keep up with the treadmill’s increased speed for as long as he can. Before long, he stumbles and sprains his ankle. Inevitably, he hits the big red STOP button. Our jogger experienced an Overstress of his own. He was unable to adjust his body’s resistance to keep up with the power of the treadmill. Ultimately, our jogger became overworked, suffered damage, and forced to shut down.

The main difference between our overstressed jogger and an overstressed electrical component is obvious. The jogger has a multitude of other functions and his ankle will heal naturally over time.

This is NOT THE CASE with Electrical Components / Electronics

An electrical PCB component has a few fixed functions. These functions are fundamental requirements for the proper operation of the PCB as a whole. It takes just one component to overheat and shutdown to render the entire board useless. Electrical components also don’t fix themselves. Once an EOS event occurs, the component most likely will undergo examination to determine the cause of failure. Depending on the results of the examination it will either fixed or replaced. This is equally as difficult as it is expensive. As a matter of fact, according to Intel, EOS is the number one cause of damage to integrated circuit components. It’s a prevalent problem in the electronics industry.

There is another significant difference between our treadmill analogy and an EOS event. The EOS can occur as a result of a singular event or persisting conditions. It can happen in a matter of milliseconds or over the course of weeks or months.

In this sense, we can think of our jogger being exposed to peaks and valleys of treadmill speeds. As unsuspecting intervals of intense speed occur on the treadmill, our jogger can’t make the necessary adjustments. His body can’t keep up with the demands and he’s forced to shut down.

EOS can manifest itself in one of the following ways:

EOS can result in: 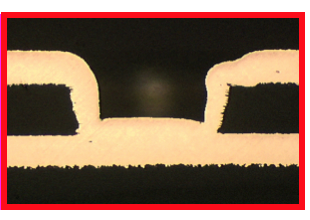 The "Via" in its original state -- prior to any storage.

Another Worst-Case Scenario due to Corrosion:

In another worst-case scenario corrosion can result in an immediate loss of the electronics. One example is from India with a component packaged in standard ESD packaging (shielding bag). 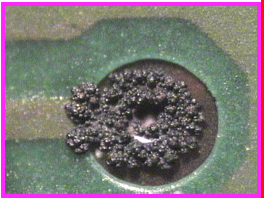 The "Via" after 6 weeks of storage in India (China would be worse), in a standard shielding bag.

The Shielding bag did not protect the chip from the damaging effects of bad atmospheric conditions (pollution). Pollution is also commonly known as ground level ozone.

This via example shows that even when properly packaged a bad environment absolutely requires enhanced packaging.

Packaging that does not just protect from ESD damage, but also from corrosive gases.

Typically, this qualifies as an ESD event. The exception being, that an SEM-EDX analysis showed that the Copper was still there.  The Copper had converted over to Copper-Sulfide. 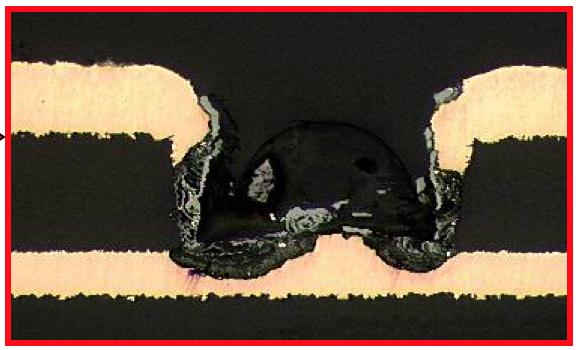 Another (magnified) view of the "Via" after 6 weeks storage in India, in a standard sheilding bag.

Corrosion literally ate up the Copper via, making the device non-functional. Proper protection against ESD and corrosion would have prevented this from happening.

An Alternative Scenario for YOUR Products:

Using Static INTERCEPT bags would have provided both permanent ESD protection, as well as protection from the corrosion gases.

To learn more about how IT solutions can protect you against corrosion and ESD damage, contact us directly at (847) 821-8280, or send TEAM Intercept an email.