I sometimes wonder what might have been the plight of Apollo 1 in 1967, if Intercept protection had been a reality.

Jan 27, 2016 marked the 49th anniversary of the fire that killed the 3 astronauts of what would have become Apollo 1. The fire shocked a nation, put NASA on notice, and became the worst disaster for the US Space program. That is, until Jan 28, 1986 when the Challenger exploded just 73 seconds into its flight.

The Apollo 1 Crew Members
THE ASTRONAUTS OF APOLLO 1: THE FIRST MANNED MISSION IN THE APOLLO PROGRAM

The Commander of Apollo 1 was Gus Grissom, one of the original Mercury astronauts. His first spaceflight was marked by his capsule sinking after splashdown. He flew again in Project Gemini (NASA’s second spaceflight program) in a spacecraft he named Molly Brown.

The senior pilot on the Apollo 1 was Ed White. Ed was a Gemini veteran who made America’s first spacewalk in 1965. Rounding out the crew was pilot Roger Chaffee. Roger was a talented rookie who was more than capable of holding his own with his experienced crewmates. He was a notoriously good guy who thanked everyone for their contributions to Apollo, right down to the janitors. 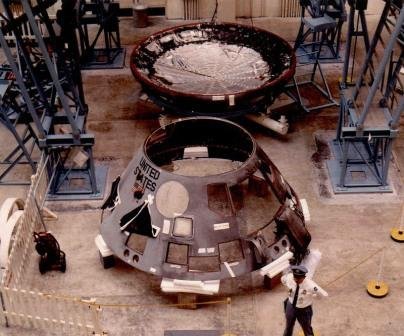 By the end of January 1967, the crew was going through their final prelaunch tests. Barring some major setback, they would make the first manned Apollo flight on February 21. One routine test NASA had done since Mercury was the “plugs out” test, a final check of the spacecraft's systems.

Consumed by Fire
THE MEN, THE MISSION, AND THE MEMORIAL OF APOLLO 1

Just after 6:31 that evening, the routine test took a bad turn. Engineers in mission control saw an increase in oxygen flow and pressure inside the cabin. The telemetry was accompanied by a garbled transmission that sounded like someone yelling fire. However, the static made it impossible to hear the exact words, or even distinguish who was speaking. As a result, even the official transcript reflects the communications problem.

But flames visible through the command modules porthole window left no doubt about what the crew had said. Engineers in the White Room (which astronauts enter the spacecraft through) tried to get the hatch open but couldn’t. It was an inward opening design. Neither engineers outside the spacecraft, nor the astronauts inside, were strong enough to force it open. Unfortunately, the internal air pressure in the cabin proved to be too great. The men in mission control watched helplessly as the scene played out on the live video feed.  Concurrently, all three men perished.

The Apollo 1 accident review board determined that a wire over the piping from the urine collection system had arced. Initially, the fire started below the crew’s feet, so from their vantage point they wouldn’t have seen it in time to react. Everything in the cabin had been soaking in pure oxygen for hours, and flammable material near the wire caught fire immediately. As a result, it took ten seconds for the spacecraft to fill with flames.

One of the first decisions made in the Apollo 1 aftermath was that all materials on board a space craft need to be flame retardant. As a result, this same rule is still in place today. It was for this reason that we at Intercept Technology™ developed our ATFR material, trade named LF8900-C. The ATFR combines the state of the art in long term, contamination free ESD protection (anti-static protection) with a V-0 FR rating, making this packaging ideal for space applications. Also, Intercept has found a home in the space program, being one of the cleanest packaging materials used, while providing permanent ESD protection with long term, non-contaminating corrosion protection. At EMI we are proud of our part to make sure that another Apollo 1 disaster never happens again.

For more information about Intercept Technology™ and the benefits unique to Intercept protection, please call us at (847) 821-8280. If you prefer, you may send us an email.