ESD protection may not be the first thing you think about when you enter Antarctica. For most, the singular thought of cold permeates all consciousness and everything else follows thereafter.

Antarctica is the largest desert in the world as well as being the coldest, windiest, highest and driest continent on Earth – yet it holds 90% of all of the fresh water on the planet.

The first recorded sighting of Antarctica was not made until 1820, by a Russian expedition. It is interesting to note that Captain Cook came close. However, he stated that even if there was land there, it would be too cold for any practical use. This was purely a theory and speculation from ancient times. He was wrong, groundbreaking research is still going on there. He was right about the cold, though. Antarctica is the only continent where people survive due to technology and the advancements made to date.

It is interesting to note that Antarctica was part of a vast continent at one point. It had flora, fauna, and animal life. Fossil remains found in Antarctica are also found in southern parts of Africa, South America, Australia and New Zealand. The ice sheet of Antarctica has been in existence for at least 40 million years. With the average thickness of the ice being 1 mile, there actually are up to 300 lakes under Antarctica. These are kept from freezing by the heat of the earth’s core – talk about extremes. 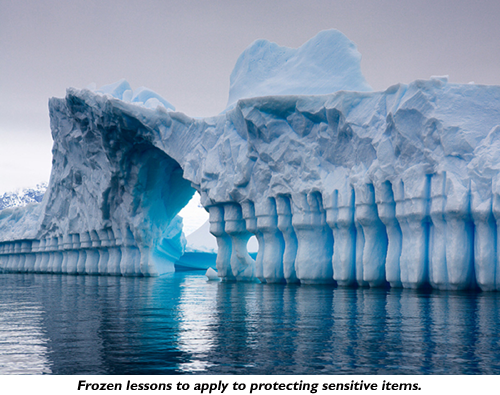 Times change, technology and products change. We typically do not experience extremes like Antarctica. However, it is interesting to know that there is technology which survives and functions there. In fact, it is already there. It helps to protect the history of those who braved the conditions in order to explore this hidden, frozen world.

The British Museum contact us about 10 years ago, looking for information and materials to help in their project. Other organizations around the world, shared in this to help save various Huts in Antarctica, including Shackleton’s Hut.

There are no electronics at this particular hut. However, there is plenty of metal. The metal still corrodes. Corrosion slows as temperatures reduce, but since it is a chemical process, corrosion still occurs. Intercept has been tested and shown to work and be effective all the way down to -42º.

Traditional anti-corrosion technologies do not function as temperatures drop below certain levels. However, Intercept, with its basis being chemical reactions, keeps on working.

Also, at temperatures below freezing, traditional ESD bags and films will not function. This is due to their anti-static properties depending on trapped humidity on the surface of the bags and films. Intercept provides permanent ESD protection that does not depend on a trapped moisture layer on the surface. Its ESD protection properties are truly independent of temperature and humidity – working the same in Antarctica as in Singapore.

New Zealand is leading the effort to preserve the history and huts in Antarctica though their Antarctica Heritage Trust. Visit www.nzaht.org to discover what you can do to help preserve this fragile history.