Imagining Los Angeles as a carbon free utopia, may not be as difficult as many might believe.Our Quick Review -- I am a sucker for musicals, especially one that pays homage to so many movies. From Whiplash and Funny Face - all the way back to Casablanca - La La Land honors what has come before it. Not only does the film pay respect to these classics, but it adds to the foundation they had previously established.

I did promise not to do anymore movie reviews, but La La Land was too good to pass up. To start, the movie is well worth the buzz it has received. A love story set in Los Angeles, the film is a truly enjoyable time and escape. The characters have fabulous chemistry. The locations and backdrops pull you in, mesmerize you and truly become part of the story's fabric. Personally, I hate when people give away endings or key plot twists, so I will make sure that doesn't happen here. Instead, the aspect of the movie that I would like to concentrate on has to deal with decisions, reactions and alternative realities.

Alternate realities have appeared in fiction innumerable times. You can go all the way back to It’s a Wonderful Life and still see their depiction. It's the emotional pull generated by alternate realities that's established them as such a popular movie trope.

The use of alternate realities helps us to wrap our heads around that age old question: What If? They highlight the key importance of our decisions and actions. Equally, and usually most regretfully, they highlight our inactions. How often are we presented with situations and choose either the easy way out or fail to acknowledge the opportunity that's been presented to us? 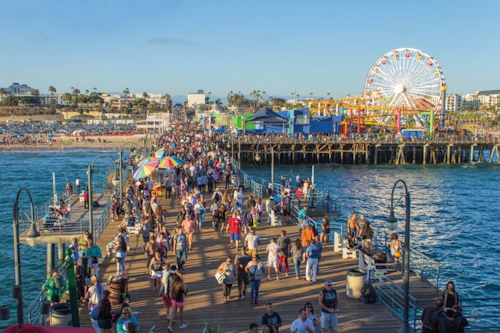 The Los Angeles presented in La La Land most definitely differs from the LA that we experience here and now. Having been to LA on many occasions, I can attest to LA’s often high pollution levels. These were invisible in the movie. Instead, the film shows clear blue skies, stunning sunsets and the valley in its entirety. This imagery makes the spirit soar and helps to create an emotion connection to the film.

In my opinion though, this type of paradise imagery reminds me of the alternative reality of Los Angeles... I'm talking, of course, about the rising pollution levels that plague the city's beautiful landscape.

It begs the question: What Can We Do to Help?

Intercept Technology Commitment
We are proud to be carbon neutral and offer products which contain no oils, no volatiles (VOCs), no contaminants, and do not outgas.

We started working with the Intercept Technology 27 years ago. It was an opportunity that could not be passed up and journey that needed to be taken. Initially, as a curiosity and a job, and later as a passion for doing good in the world. Dreams and goals are not only for personal happiness and satisfaction; they're often tied to making a difference in the lives of others, as well.

A passion for the environment and wanting to protect it quickly became a real and tangible part of why I love working with the Intercept Technology. Because our anti corrosive products are engineered to be efficient, sustainable and long lasting, promoting it just makes sense to me.

Less waste is better for the environment and all it's habitants.

A single technology that can replace the use of oils and volatiles is something special. It’s rare that you find a technology that protects items like jewelry, electronics, avionics, car parts and artwork alike. It ensures they're kept in the same condition as when they went into the bag or wrap.

The simple act of eliminating the need for oil coating on metal parts (which really isn't such a simple act) saves time and money for manufacturers. Additionally, it eradicates the wastes, solvents and other cleaners required to clean the oil off the parts.

Intercept Technology provides simple, effective, carbon neutral, long-term protection. It works by attacking and eliminating the atmospheric pollution inside the bag or wrap. In this sense, it creates an alternate reality - a pristine environment inside.

The most inspiring part of this is that this reality is attainable. Through the engagement of reusable, recyclable, carbon neutral, clean and efficient materials, we can DRASTICALLY reduce rates of industrial waste. And when we do that, the beauty of La La Land's Los Angeles will become our very own reality - no longer an alternative one.

Learn more about our permanent anti-static, long term, contamination free corrosion protection products by calling us directly at (847) 821-8280, or sending us an email.