Innovative Technology: Then vs. Now

Although innovative technology has been present since ancient times, our focus for this post is on World War 1 Technology.

The Atlantic Magazine just posted a page of pictures of World War 1 Technology, find it here.

Many of these pictures show old designs that paved the way for the future.

For example, the first picture (in the article link), called an "acoustic locator" -- was a predecessor to sonar.

Innovative Technology in 1914
A PERSPECTIVE FROM WORLD WAR 1

The thought of wheeling around a large funneled device to listen for faint signs of aircraft noise now seems absurd.

Many of the other ones I found interesting were about communication. One was a picture of a heliograph (a Morse code communication device). Another was a field telephone that needed to have a large spool of wire uncoiled behind it. Not to mention, the telegraph room with a baffling series of wires. Many of these are seemingly comically outdated, although it only appears that way. Advancments have afforded us many years of hindsight and countless technological improvements under humanity’s collective belt. Nearly every picture shows a technology that we have improved upon. 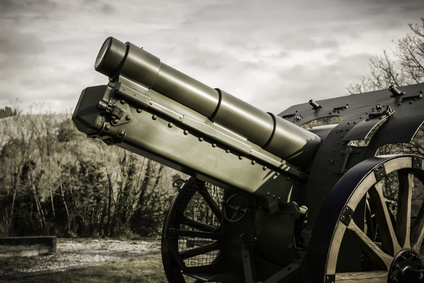 All of the pictures on the page had metal components to the technology they were displaying. Remarkably, the technology used to protect metals from corrosion and degradation has not changed since WWI. As a result, many companies are still using methods involving oils and greases -- used for nearly a century. Unfortunately, the world has changed; the atmosphere has been filled with more and more pollutants as we have industrialized. This demands more robust protection. Be that as it may, many of those who are most susceptible to this threat are mired in traditional methods of preservation. If the pictures on the WWI Technology Page have shown me anything it is that we must take advantage of new and better technologies. Otherwise, we would be stagnant in our development, and still carrying around spools of wire to go with our “mobile” phones.

Innovative Technology in 2014
A PERSPECTIVE OF MODERN PACKAGING TECHNIQUES

A development that has changed the packaging and preservation landscape was the development of Intercept Technology™. Oils and greases share two very underirable traits. One being that they do not work in every environment. Two being that they offer short useful lives. These attributes hinder their ability to protect in ways that suit the international trade that has become the norm. Intercept Technology™ can have a useful life of 20+ years and is in use effectively on 7 continents. Despite different demands and different environments, one product is effective in its protection. As the world continues to develop shouldn't you be using the most up to date products?