Export Packaging: The Long Way Round

I recently came across an article at the Wall Street Daily. The article claimed that Russia was proposing to build a superhighway. A superhighway -- that would, in effect, connect Moscow to New York and London (and everywhere in between).

This plan was delightfully ambitious, almost to the point of impossibility. However, it is a good fit with the generational push to connect the world. I had two major problems with this.

Firstly, how would they build such an unimaginable thing in the first place? Secondly, how would goods actually make it? A book, called the Long Way Round, features Charley Boorman and Ewan McGregor riding their motorcycles around the world. Their path, though a bit more arduous and romantic, was not nearly as efficient as the Russian plan.

This is because the Russian route would be a way to connect Russia with other countries (and continents). This would enable Russia to export its goods, linking its oil reserves, forests and other natural resources, as well as it's manufactured goods. The main article claimed that this would cost trillions of dollars, because Russia spans 6,200 miles east to west. The article was careful to note that this “isn’t just a pipe dream…” -- due largely to the Trans-Siberian Railroad. A historic feat, in and of itself, construction of the Trans-Siberian Railroad concluded in 1916. Its construction ensued during a time, when it was thought that such a railroad was impossible to complete as well. 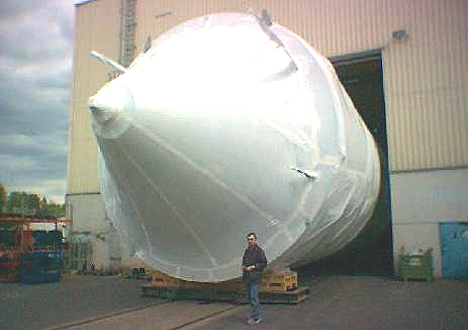 The Chinese Trans-Asian Railway has already begun to connect Asia to Europe by way of Turkey. This makes the impossibility of such proposals fade, albeit slightly. I suppose that answers my first concern, but my second still survives. The Trans-Siberian Railway takes about a week to travel. However, if Russia were to want to export some of its forestry goods or manufactured goods, the highway would have to be able to support that level of wear and tear.

We at Intercept Technology routinely work with customers who ask the same question. While our expertise extends beyond export packaging, our projects can range from the minute to the massive.

For example we worked with a German Beer company in need of export packaging. The goal being to export a beer tanker from Germany to South America (see the photo).

The storage tank, the largest and first of several shipments, required special rigging and handling because of its size. Naturally, Intercept Shrink Wrap was the export packaging choice. The Tank needed protection from physical harm. Also, it needed protection from corrosion to ensure the quality of the beer, and the seals on the tank. For Intercept Technology™ solutions, corrosion protection does not depend on size of the object. However, the challenges, due to the size of the container would magnify the stresses.

The container would need many rigging and tie down points, which would compromise hermetic sealing. Fortunately, Intercept Technology™ does not require hermetic seals. Inasmuch, cutting out of the tie down points from the shrink wrap, was a snap. Subsequently, the rest of the tanker remained protected and stabilized on the freight liner (ship). The problems based on the scale of the project were ultimately overcome. This triumph was due in part, to the flexibility of the packaging procedures. Needless to say, the tanker arrived in pristine condition.