What commonalities does product innovation share with cats, you ask? Well, it's not as far fetched as one might think. It's an interesting juxtaposition of old versus new.

With their enormous, deadly-sharp canines, saber-toothed carnivores are well known to many. Surprisingly, there is more than one "saber-toothed cat."

Evolution of the Feline

The sabertooth morphology appears several times during the history of the mammals. Saber-toothed members of the Carnivora, (the mammalian order containing cats, dogs, bears, weasels, and others) appeared independently, twice.

Why the enormous teeth? Certainly they were useful in hunting, but opinions vary as to exactly how. Some paleontologists suggest that they grabbed and held onto prey - while others offer a more plausible hypothesis. That being, that saber teeth delivered a fatal ripping wound to the belly or throat of a prey animal.

Sabertooth carnivores may not have tried to grapple with prey. More likely, they delivered one crippling stab wound and then waited for the prey to die. 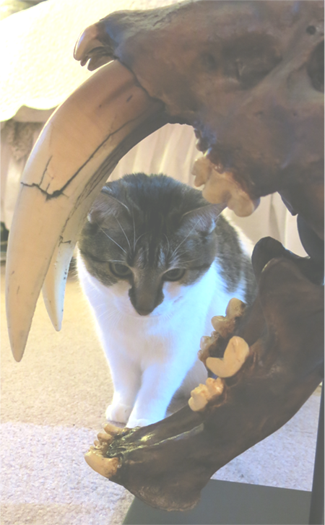 The modern-day house cat draws its lineage to wildcats in the fertile crescent (Middle East). Farmers were likely the first to domesticate wildcats approximately 10,000 years ago, ironically. The animals may have been helpful in hunting mice and other pests plagueing farm fields in the early human settlements. As one species of cat was going extinct, another one was coming onto the scene.

Packaging also has a life-cycle. Older technologies come into use in response to needs and/or requirements of that particular time. Some technologies stand the test of time and modify and try to remain relevant, but their roots always go back to the original need. As times change, products and conditions change - as well as how we handle, ship and store items - which leads to how we begin to demand more from the packaging, as we should. Just like before, these new conditions helped to spawn the birth of new technologies and new products. That is how we look at the anti-corrosion market.

The original anti-corrosion products were oils, paints and varnishes - to cover metal surfaces. The 1920's saw the birth of dry-packaging for ferrous metals, which brought forth barrier packaging and desiccants. These barrier films have changed over the years, but still mainly are aluminum foil laminates. The big problem with these bags is that they need a hermetic seal (unbroken, complete seal), need enough desiccant to maintain less than 37% RH and only work for ferrous (iron based) metals, since humidity is not typically a factor in non-ferrous corrosion (predominantly caused by corrosive gases). Due to their non-recyclablilty in Europe, the fact that desiccant load requirements limit long term storage to 5 years and that customs will often slice open foil bags (rendering the protection useless since the protection depends on a hermetic seal), other methods arose to compete with this.

The next leap in corrosion protection came in the form of volatile corrosion inhibitors (VCI class of products). Fist a paper VCI, then a plastic (poly) VCI. Each with strengths and negatives (a big one being longevity and the fact that they often use oils or other materials in their packaging).

The Development of Intercept Technology™

The next product innovation in this chain was the Intercept Technology™ developed by Bell Labs. Intercept combined positives of the other technologies and went farther - being a volatile and oil free material gives it longevity and the ability to protect items for up to 15 years (as confirmed by the German Automotive Industry approval of Intercept for 15 year storage in the original packaging - the only material so consented). Intercept helps companies go oil free - a huge push in Europe today.

So, is Intercept the next house cat?