On March 1, 2015 -- 60 Minutes ran a report on Lumber Liquidators laminated flooring outgassing formaldehyde. The outgassing remains at levels that exceed California Air Resources Board acceptable limits. Said limits, adopted by congress in the Formaldehyde Standards Act of 2010, will take effect across the country this year.

The problem is not that formaldehyde is used during production of flooring. The issue is the level at which it is used by factories is unacceptable. Resultantly, the flooring is outgassing at levels significantly higher than it should be. It also doesn't help that this flooring is now in thousands of homes. The production of this flooring requires formaldehyde to bind together wood particles in the core boards of the flooring. The factories manufacturing the flooring, must, and are capable of, producing materials that comply with these standards. Be that as it may, they are not in compliance.

Products that rely on chemicals, in this case as a binding agent, carry an inherent risk of outgassing. In controlled amounts this can be harmless. However, quality control of these amounts carries high costs, as Lumber Liquidators is seeing as investigations continue.

Some methods of preservation rely on keeping the outside environment, aka pollutants, out (namely hermetic sealing). This method does not account for chemicals emitted (outgassed) by the product that the preservation product is protecting. 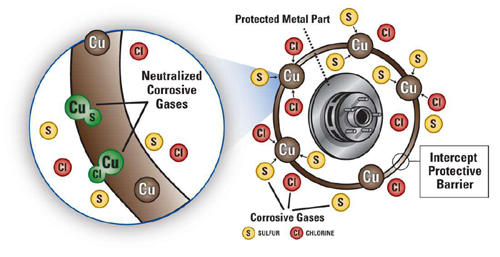 Intercept Technology™ relies on a reactive process of preservation. The process prevents outside pollutants from entering the package. It also actively reacts with pollutants that are inside of the package to keep the environment inert. This means the contaminating gasses inside the pack at the time of wrapping, react away. Afterwhich, as the product may emit gasses (outgas), the technology continues to work and clean the environment inside of the package. Thusly, Intercept Technology™ provides continuous protection.