Freight shipping and movie reviews don't always go hand and hand. We try to keep movie reviews down to a minimum. However, every so often one strikes us as needing exloration and commentary. A recent viewing of the Coast Guard rescue mission as detailed in “Finest Hours” rose to this level. The level to which to the cinematography was able to capture the temper of the sea, was brilliant. Said temperament, indeed, is a reality that those involved in freight shipping know -- all too well.

On the surface it is a simple message of following orders and the human abilities to survive. The movie is really divided into three basic components. One component being the sinking tanker, another being the community (Coast Guard and town), and finally the rescue crew.

The sinking tanker shows us how un-assuming people, but subject matter experts, can be thrust into positions of authority. It also illustrates how, in crisis, we look to experts. The underlying message is one of creativity under pressure, looking at a situation and analyzing the best way forward. This, by the way, was not necessarily the popular or perceived “easy” way.

The loud and the vocal wanted to use the lifeboats to leave the sinking tanker. However, in such a stormy sea, without knowledge that anyone would look for them or know that they were in distress presented too many unknowns. In this particular case, the dangers outweighed making the logical, accepted way a truly viable one to go forward with. Instead, an unlikely leader rose up and outlined an alternative way. The alternative, however unconventional, basically involved steering half a ship with a Gerry-rigged tiller and lots of teamwork. Choosing the unconventional way gave the rescuers time to locate the sinking ship. Indeed, it was truly a critical variable that saved the lives of 32 men. 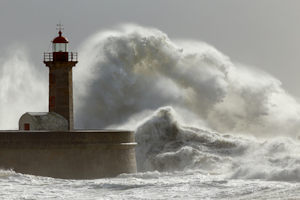 The Coast Guard and mariners, who all, but the commanding officer, saw hopelessness in a small rescue boat being able to actually make it out to sea. They either declined to go, or advocated going but not actually trying. The commanding officer simply was willing to send a crew to do the seeming impossible. The townspeople were there for each other to support for something that was all too common in their community. Expectant, that is to say, that the sea might win.

The final group, four men, guided by Bernie Webber, braved the odds and a changing bar to head out into the massive storm. Using instinct, and his senses, Bernie made it out into the sea, something no one thought was possible. Destroyed in the process the compass was unavailable. So, using sound, dead reckoning, and a feel for the sea he was able to locate the broken ship. As a result, he saved all on board except one. The boat, well beyond its capacity to hold 36 men, was led back by Bernie and his instinct. He defied the commanding officer’s orders to head out to the large rescue ship. Heading to the rescue ship, and following orders was the logical step, however it was not the right one. Holding true to what he knew was right Bernie was able to find his way home, saving all on board.

At EMI we use our knowledge and instincts on corrosion protection. Along with helping companies to make their processes more robust, we help make them better for protecting against corrosion. Often it is little changes that can make a big difference in corrosion control. Also, we do what we feel is right, for both the environment and for the products being protected. All and all, that equates to going oil and volatile free.